Foodservices in the Metaverse: a New Technological Frontier for the Industry?

In October 2021, Facebook CEO Mark Zuckerberg announced the company rebrand to Meta, reflecting a shift in their core business from a social media company to a “metaverse company”. The development had been a long time in the making, since Facebook entered the virtual reality tech market in 2014 by acquiring Oculus, a head-mounted display technology production company.

The announcement received mixed press reviews, with commentators highlighting how this was probably an attempt to distract consumers from the criticism the company had faced following the publication of the “Facebook Papers”, as the rebrand didn’t entail any substantial changes to the company structure.

An unprecedented social hype developed as a consequence: Google searches of the word “metaverse” skyrocketed in the following weeks, countless articles were (and still are) written and even an online journal called  Journal of Metaverse was founded.

For those not familiar with virtual reality technology (I wasn’t either until I started university last year), the concept of metaverse is not at all new in tech and has been considered common place for several years within the gaming community, where multiple metaverses exist, allowing users to create and preserve their digital identity across different platforms.

The word was coined in 1992 by Neal Stephenson for the sci-fi novel Snow Crash. Set in the early 21st century, it imagines a future where power is in the hands of a few global corporations. The metaverse is a 65,000 km long road where humans enter as avatars – wearing goggles and earphones – to escape the real world. Since the novel was published, developments in technology have allowed to translate Stephenson’s cyber-punk vision of a virtual future into an achievable reality, often referred to as “Web 3.0”. 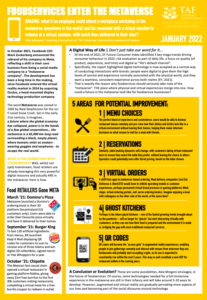 How does this connect to foodservices, you may ask? Well, whilst it is not (yet) a mainstream, widely utilised technology and market entry still carries considerable costs, food retailers are already leveraging this very powerful digital resource and actually ARE in the metaverse. Here is how.

Inflation and the potential impact on foodservices explained

In December 2021, new figures revealed the cost of living rose by 5.1% in 12 months to November, its highest rate in 10 years; the jump, driven largely by rising fuel and energy costs, puts further pressure on both households and businesses (trying to feed their people at work and home).

Given that we’ve been asked about the impact of inflation on foodservices, TAF’s catering consultants now explain the basics of inflation and what it might mean to anyone in facilities around foodservices. 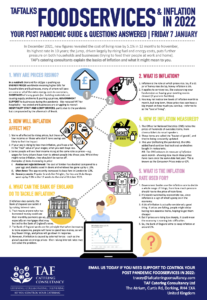